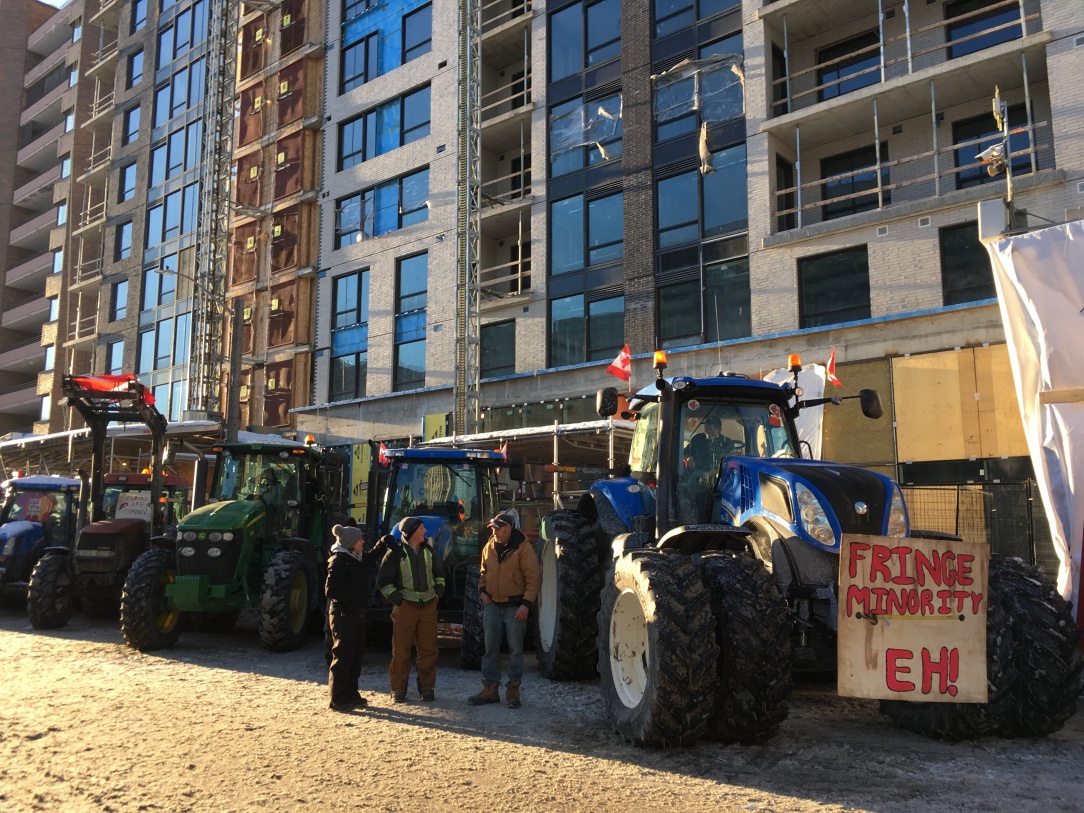 Note: Edited on Feb 10th due to helpful reader response, including removing the reference to Ghandi due to some increased yelling at schools as part of protest behaviour. Keep the feedback coming!

I have a sign from MCC’s migrant welcome campaign in my window: “No matter where you are from, we’re glad you are our neighbour.” I’ve been reflecting on what that means as tractors drive past my house on the way to Parliament Hill. It’s challenging to look at this sign and think about who is really welcome to my neighbourhood. But if I believe that refugees and migrants belong in my neighbourhood, that sex offenders are welcome here, doesn’t that also mean that anti-vaxers, oil patch workers, and truckers can be here too?

This is scary and hard, especially after almost two years of doing what Ottawa does best: following all the rules, trusting the authorities, and being slightly snide. It doesn’t feel fair that after all our sacrifices and lockdowns, people are out having a block party on our streets. In the midst of all of it, the most vulnerable people, the homeless and the elderly seem to be the most impacted by noise, cancelled grocery deliveries, and blocked bus routes. Essential services are hard to access, especially for those most in need. Despite the lifting of lockdown, many businesses downtown remain closed. People are angry. People are scared. People are sad. I get it.

It feels counter intuitive and heartbreakingly hard, but the worst thing those of us who want disruptions to end can do is react out of these emotions by counter protesting or calling in the army or events will very quickly spiral out of control. The world is watching how we respond. We have to think less about the specifics of the demands made by protestors and more about tactics and strategies on display if we want to de-escalate tensions and avoid violence. We also need to move our focus away from a lens of US politics and think about what may be specifically Canadian about this movement.

I’ve been walking around everyday, observing, listening, questioning. Here’s what I have noticed.

This appears to be (at this at this moment) a classic, relatively nonviolent protest, using methods outlined by Saul Alinksy and Gene Sharp. There seems to be a genuine belief among protestors that they are here out of love for Canadians and want to actively demonstrate that love in a very Canadian way, with a mix of Canadian issues. I heard a speaker today talking about welcoming migrants to Canada and ensuring that Canada remains a country where migrants and refugees want to come, because they will be free. I have seen multiple “All Children Matter” flags and stickers. There is humour and creativity on display everywhere. There is an actual bubble machine! Protestors are leveraging power through generating disruption and refusing to follow the rules in ingenious ways. Using these tactics, protestors are succeeding in making the police look dumb and ineffective. Yesterday, for example, I watched two women on horseback ride down the sidewalk in front of Parliament Hill, followed by a group of at least six cops on foot. It was ridiculous. The jerry cans filled with water are brillant from a pure tactical perspective. This doesn’t mean I agree with the demands or the political ideology here, but understanding rhetoric and tactics help.

While they say they don’t appreciate mainstream media, protesters are adapting and changing based on news coverage and what they hear from folks in Ottawa. I have seen people cleaning up trash, handing out free food especially designated for the homeless (yet I haven’t seen many folks beside protestors present), and honouring Terry Fox. I talked to someone the other day who heard about the losses a local restaurant business had suffered since the lockdown, called their home church, and wired the restaurant money to cover the rent. Since the first weekend, I haven’t seen a Nazi or Confederate flag. Leaders and convoy members are actively trying to distance themselves from accusations of white supremacy. Protestors claim nonviolence and that protesting peacefully and showing love is important to them.

These are important leverage points, especially when there continue to be incidents of violence, harassment and racism. Masked folks have been threatened or assaulted. I have been catcalled. Journalists are harassed. None of this is ok. None of this excuses leadership ties with racist movements.

The most powerful (and alarming) part of this protest, however, is the community that is being built. Everywhere I go, I see people meeting each other, sharing stories, worshipping, eating food together, and engaging in creative actions together. Protestors and supporters have felt isolated for a long time and what is happening across Canada is the start of a movement that is meeting emotional needs and providing a sense of wellbeing for folks who see themselves as marginalized.

So, how do we respond? Here are some ideas:

Ottawa residents are for the most part terrified of the protesters. This works in the protestors’ favour. Power, authority and safety, however, are social constructs. They exist because we believe in them, and by believing in them, reproduce them.  As Saul Alinksy says, “Power is not only what you have but what the enemy thinks you have…The threat is usually more terrifying than the thing itself.” By labeling everyone as dangerous and ourselves as victims, we have trapped ourselves in our homes. Our perceptions of safety impact what we do and right now we are on twitter demanding that the state save us. In many places around the world where protests take place with weak states, it’s up to civil society to play a leading role.

I’m not saying it is perfectly safe outside: large groups of people with lots of emotion and plenty of diesel fuel always have the potential for volatility. There have been incidents of violence and harassment. Despite the removal of certain flags, there are elements of white supremacy present. I feel safer as a white woman than possibly many of my non-white neighbours. But in order to move forward, we have to diffuse fear and take away the authority we have given to convoy members to control our lives. It’s something we do for ourselves and it is only something we can do by coming together as a community.

Edit: I’m serious about this community part. We can’t effective change unless we engage together in collective ways that also provide safety for the most vulnerable and those most at risk of racial profiling and other forms of harassment. This is a call for churches and organizations to come together to respond in non-violent and surprising ways that allow us to together diffuse tensions and take away power, rather than individual responses.

What if we, as citizens, not the state, worked to create some neighbourhood rules together with protest leaders? We could set up a welcoming committee that works to establish the rules of how we coexist based on our shared values, including public safety and the right to protest. This will of course require collective creativity, not individual responses. We need faith leaders, business owners and other community leaders to come together in a spirit of diffusing tensions and looking for alternative solutions to avoid violence and ways that also protect the most vulnerable in Ottawa. This is a trusted group that could also aid in negotiations and work to ensure the safety of essential workers in stores and restaurants as they reopen. This is also a space where we document acts of violence and racism and hold protestors accountable to those collective agreements and to their stated goals of nonviolence and antiracism. Doing so is in all our best interests.

This won’t end the political demands or the flow of funds or reperate for harms caused, but it will hopefully provide some breathing room to work those things out calmly and ensure democratic processes take place, that no one gets hurt and that people can go home sooner.

Imagine what would happen if we all left our homes and started engaging in our normal activities, while following public health guidelines? The protest only has authority when it is disrupting our lives. If we can make it bearable enough that we can live and even thrive during the protest, the protest loses its power. If we organize together, we can go out and jump in the bouncy castles, take the free food, eat the hot dogs. Why not? If convoy members can be creative and have fun, why can’t we? If we think of ourselves as having agency to also write the rules, we have an entire world of possibilities to play with.

My streets are full of people holding signs about love and the love they have for Canada. So, let’s go out and out-love and out non-violence the convoy. We can have difficult conversations, we can talk about what we love in Canada, we can share our stories about what has been hard for all of us during this pandemic, we can hold religious services on the street where all are welcome. We might actually learn something about our neighbours by engaging and diffuse tension at the same time.

We need to build a shared sense of community between all of us, regardless of vaccination status. For those not in Ottawa, this is the worst time to distance yourself from people in your life over this protest. Rather, do the counter-intuitive thing. Reach out and provide a sense of community and curiosity. Welcome people back into your life. Love your neighbour. Talk about the values that you share and what makes you glad to be in Canada. Embrace complexity. Welcome the stranger.