September 21 was the International Day of Peace, Disarmament and Non-Violence, started in 1982 by the United Nations with the goal of creating one intentional day a year to ponder the impacts of putting aside armed conflict. It is dedicated to commemorating and strengthening the ideals of peace.

Therefore, in commemoration of peace, I asked various people what first comes to mind when they think about peace, and was kind of surprised by the answers I received. Many friends living in North America reflected on the feeling of accomplishment of a job well done, personal satisfaction, or a well deserved rest. Peace was described as something personal and emotional.

Living in a very different context and intensively studying non-violent conflict resistance in university has shaped the way I think about peace. Looking at North American answers, and then talking to some of my friends who work with me here, I realized that I rarely think of peace in terms of the personal or spiritual. For me, peace has become a political term that physically refers to the laying down of arms and the construction of something new. I have trouble viewing Canada as a country of peace when I see the actions of our companies around the world.

Now, I live in a conflict-torn country. The current conflict has been ongoing for almost 50 years but violence has been prevalent as long as Colombia has existed. Therefore, when I ask people here in Colombia what comes to mind, the first thing is a cessation of violence, or literally, peace in the form of a white dove. Many of the NGOs who work in the country identity themselves as non-violent actors by wearing the symbol of a white dove on their vest and this symbol comes to mind immediately. 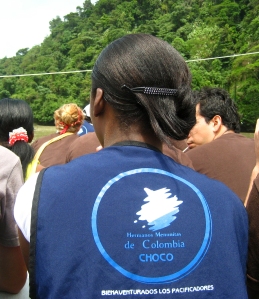 My neighbour’s vision of peace consists of a return to the town he was displaced from. This includes not only a physical return, but the dream of a return to simple times, when neighbours shared together and the before terror of what locals refer to as La Violencia changed everything. Our context and experiences have fundamentally shaped the way we see the world, in Colombia and in North America.

Yet, somehow, isn’t peace a combination of the both states, personal and political? I had the privilege of attending on forum on Sept 21 and listening to different people express their opinions, hopes and fears for Colombia’s upcoming peace dialogues. One of the participants, the ex-spokesperson of the ELN (one of Colombia’s guerilla groups) during past failed peace talks expressed the need for a spiritual dimension to the dialogues. When someone gives up their arms, as is the goal of these talks, it is like they are giving up a physical part of themselves, literally, their arms. There must be something to replace that arm, or peace will never really take hold.

Structures must be put in place that provides room for people to feel good about themselves and their accomplishments. There must be the hope that something other than violence is possible. This includes things like job creation, trauma healing, land restitution, and a variety of other aspects that make peace building so complicated. Yet at the root, people must see peace as more valuable than fighting, and that decision is a complex mix of the political, the personal, and the spiritual.

Personally speaking, when I am grounded in who I am and what I am working for, I am much more likely to do hard things like speaking out against violence and searching for a different lifestyle. I forget that I need personal peace in order to work for big picture peace and vice-versa. It is not easy to be here, nor is working for peace easy for the community and its leaders. It is important to be present, live in the movement and celebrate the small things with those around me. Sometimes that means holding my morning coffee sacred, other times laughing at the creek with my friends or sharing the absurdity of life with my fellow Seeders. These are things that help me hold on to hope, and after all, hope is the emotion that allows us to keep working for a context where peace can primarily mean something personal.