O the Ways You Can Go: Transportation on the Coast 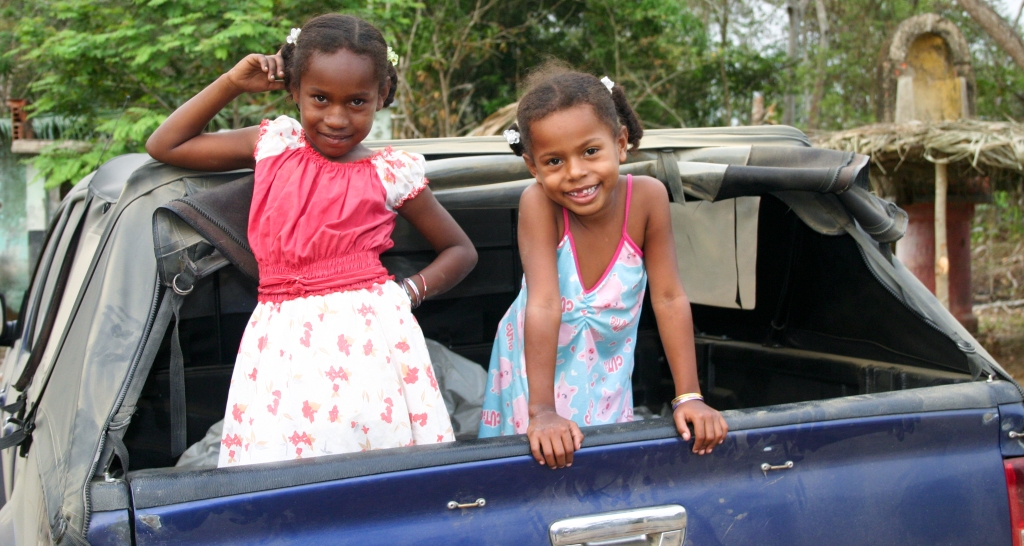 Contrary to public opinion, conflict and violence are not the leading causes of death in Colombia; rather, traffic accidents* take top place. However, travel we must, so off we go in any one of these (and there are many more), costal options.

i) Refrigerator buses: These are the closest to Greyhound on the coast and travel long distance at top speed. Tickets and departure times are fixed and luggage is tagged. There are generally two movie genres playing at top volume- war or fight club. Entering one of these buses on the coast is like entering into a different climate zone. Due to the air conditioning, long sleeves are recommended.

ii) Tocoroma etc: Always argue about the ticket price before getting on these medium sized, locally based bus lines. Don’t believe them when they tell you they will be leaving right away. If they bus isn’t full, you will be waiting until it is before hitting the highway. If there is a soccer game, you won’t leave until it is over. The motto of these buses seem to be: “There is always room for one more” and “Passing on the double line never kills anyone.” The locomotion is managed by two people- the driver and his helper, who collects money, pays the tolls, yells the destination of the bus at anyone standing at the side of the road, often serves as backup rear-view mirror, by standing in the open door and advising the driver when it is safe to pass, and soothes grumpy and carsick babies when their mothers are exhausted.

iii) Maria la Baja Buses: My personal favourite, these re-furbished school buses hold just about everyone, their sacks of agricultural produce, and their fighting roosters on the trip from Maria la baja to Cartagena. Stuffed animals jostle for position along with the icon of the Virgin and Jesus that surround the driver and very loud music featuring accordions is always playing. Decorations, including tasseled curtains, reveal a little of the personality of each driver. Any short of shock system has long gone and the ride is bumpy. Neighbours gossip with each other at full volume and vehemently protest paying extra for kids. Again, there is always room for one more and if you are standing, some else will hold your child. The posted prices are always at least 2mil more than people will pay and only someone who doesn’t know the system will end up being charged full price. Always carry exact change just in case.

b) Vans: Besides the van belonging to Sembrandopaz director Ricardo, which is deserving of its own post, there are a number of vans and collective taxis that pick up passengers all along the highway. My most memorable experience to date involves hitching a ride with some sort of wrestling team visiting the coast from Venezuela. 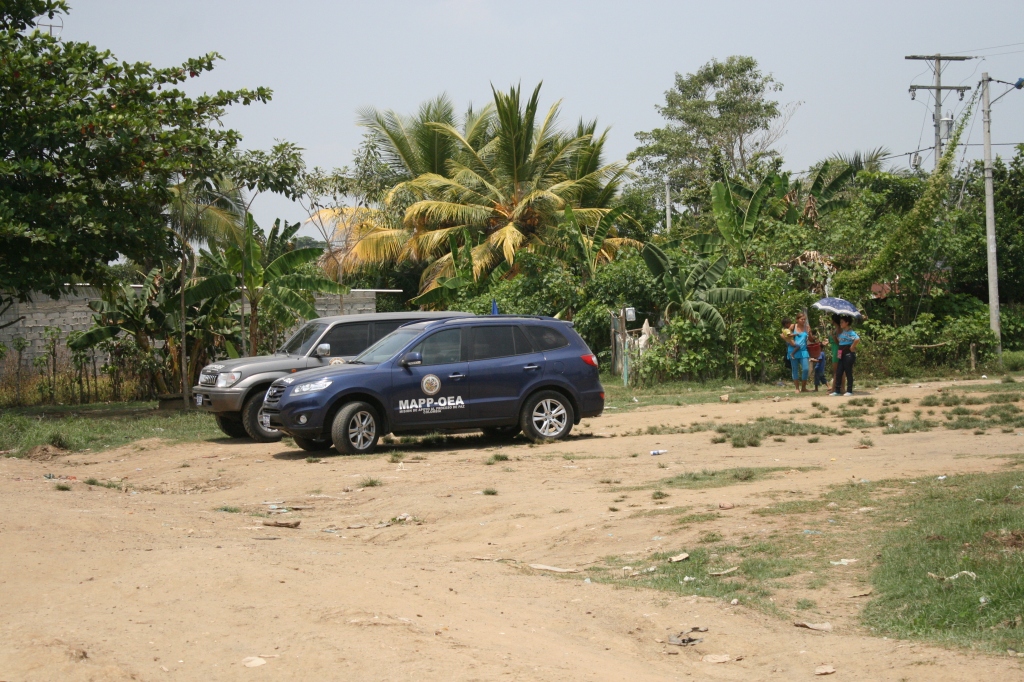 c) NGO/Government truck: To get anywhere, NGO and government staffers, excluding Sembrandopaz, have a special collection of vehicles and drivers, usually with leather seats and GPS (the vehicles, not the drivers). As the worker attends meetings, the drivers, who can double as bodyguards, gossip about places they have been and eat snacks. The best car I have ever driven in was owned by the Fiscalia and contained a special camera to film the road and a voice-over GPS that still managed to get lost going to Mampuján Viejo.

i) Helicopters are a special sub-category. Because this is Mampuján and the helicopter landing place is now included on the official tour of Mampuján Viejo. If, like the president or the director of USAID, you don’t feel safe enough in an escorted vehicle, you can always arrive by helicopter.


d) Motorcycles: After receiving reparations, motorcycles were a hot ticket item. This is the most popular form of transportation and my least favourite, probably because I keep on falling off of them. My first accident involved 11 stitches and featured a pus explosion. Thankfully the second only involved a bruised knee, but I am done with motorcycles. However, they continue to be the cheapest and most available form of taxi on the coast. For fifty cents to a dollar, a driver will take you anywhere you need to go, along with whatever you want to transport. I have personally carried a giant soup pot on my hip through the mountains but my best moto-transport sighting yet has been a woman breast-feeding on the back of her moto-taxi in Sincelejo.

e) Feet: Also a popular option, especially if you don’t have the money to pay for a taxi. In Mampuján, people strongly dislike walking, so if they must go anywhere, they leave before sunset or in the late afternoon so they are not in the heat of the day. If they are forced to walk at noon, they carry sun umbrellas to protect themselves from burning.

f) Bicycle: Every morning and evening, I can watch the farmers coming home from their fields, with a sack of produce tied to their handlebars and at least two dogs trailing behind. Children also love bikes and whip from one end of town to the other; usually, the bike is four sizes too big and contains at least three kids who keep falling off, laughing hysterically, and getting back on. 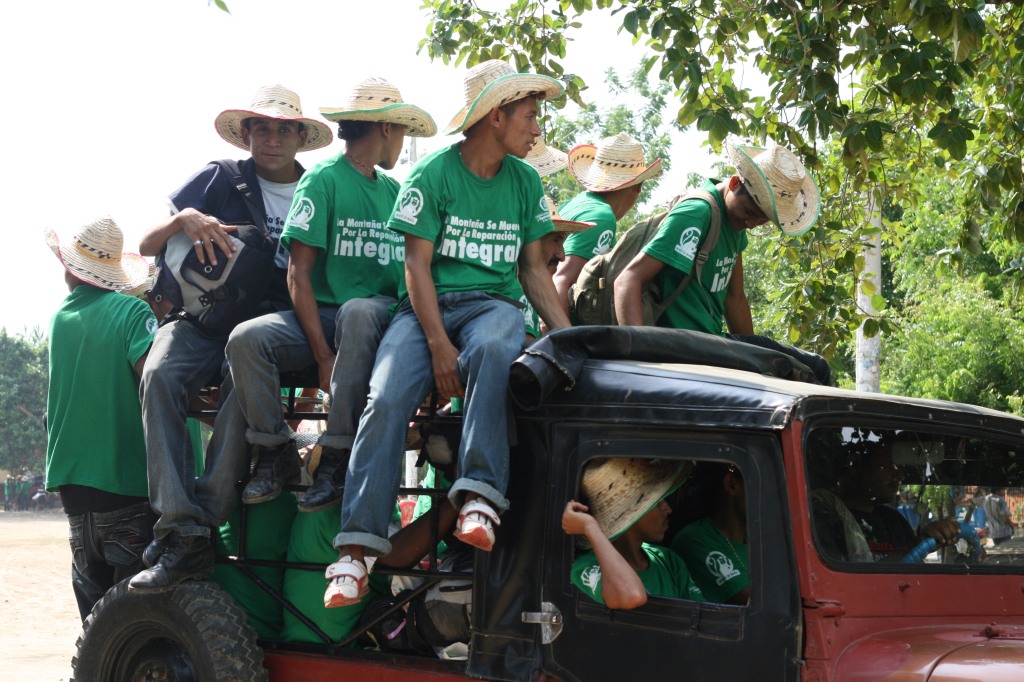 g) Truck/Jeep: More popular in the mountains near El Carmen, these jeeps can fit way more people than you would think possible and usually carry chains for muddy roads. Jeeps go over roads where there seems to be no road and the drivers are experts at creek crossing.


h) Animals: Horse and donkeys will take you where you need to go, leaving fertilizer behind in their wake. 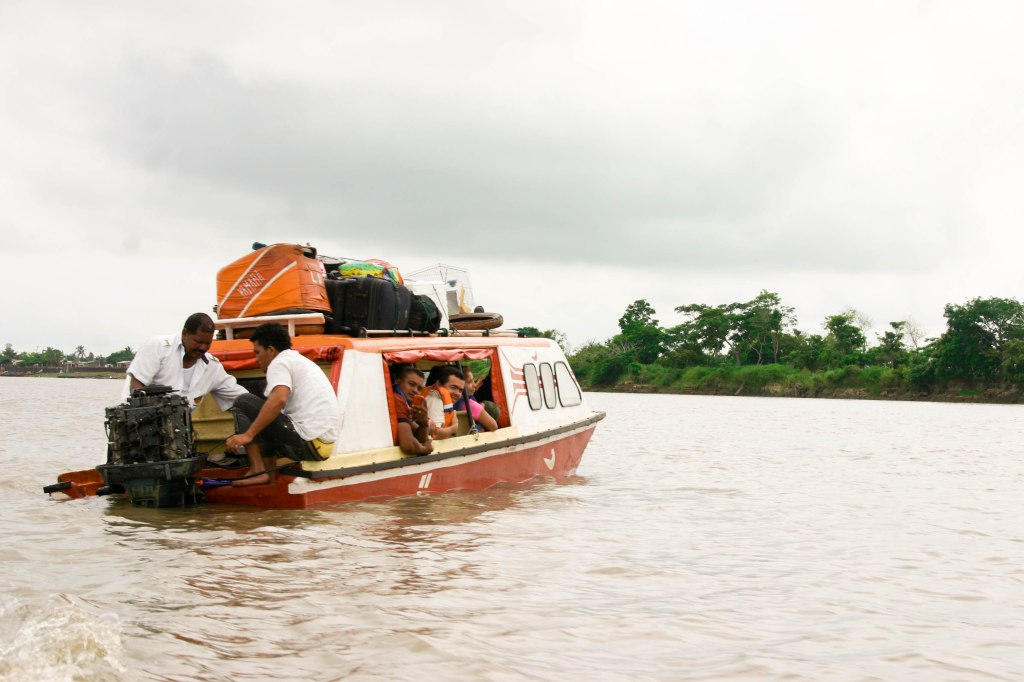 i) Boats: There are many communities which are only accessible by boat during the rainy season. This is a similar process to jeeps- many people, many things, only journeying over water instead of mud. Canoes, dugout transport boats, and the ubiquitous “Johnsons” can be found on any water way. Life jackets are optional. If you live anywhere near water, be it the ocean or a swamp, chances are you will own a small fishing canoe, ready to supply the Costeños with fish for frying everyday.

*Dangerous travel is not only the fault of the driver but a symptom of systematic problems of broken roads, general lack of roads, lack of formal public transit options and a failure to enforce traffic regulations. Until these roots are addressed, travel will continue to be risky. Less money invested in armed conflict=possibility of better roads= more lives saved=win-win.

1 comments on “O the Ways You Can Go: Transportation on the Coast”