An Ode to the Sembrandopaz Van

By Anna Vogt in Uncategorized on August 21, 2013
No comments

This is an ode, a eulogy if you will, to that tin can of glory, the Sembrandopaz van. Despite its unassuming appearance, with a royal blue paint job, a side door that I never really did figure out how to open, and the seats that appeared to be taken straight from the world’s most uncomfortable Greyhound bus, the van served as a beacon of Sembrandopaz’s presence on the coast. 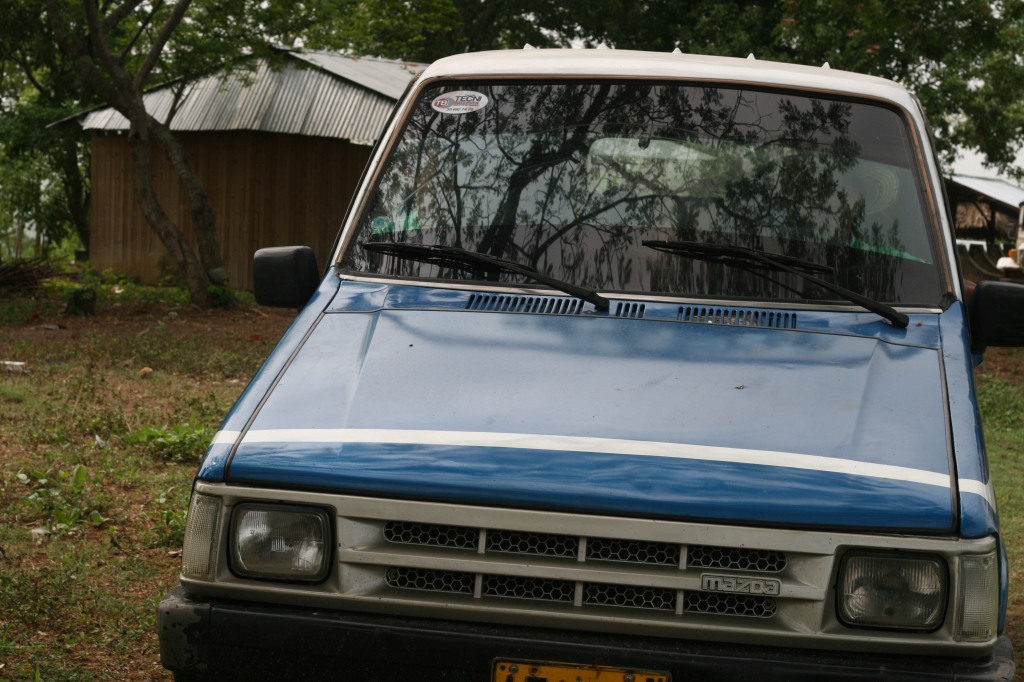 Unlike other organizations with their private drivers, armed guards, four wheel drive and automated GPS systems, Sembrandopaz’s arrival in the communities was heralded by the k-thunk, k-thunk, k-thunk of the van rolling in. In fact, the arrival of the van fit perfectly with the unassuming trust relationship built between the communities and Sembrandopaz. The van was of course driven by Ricardo himself, and full of all the various hitchhikers picked up along the way, staff members, and of course, us- the international accompaniment team- bright eyed, a little cramped, and eager to change the world.

When the van was in the shop, its absence was sorely felt. Instead of its comforting presence, we had to ride in clown cars. Once it broke down three times in the span of one evening. I was forced to hitchhike with an infected and runny knee injury, after almost getting run over by multiple giant cargo vehicles as we pushed the van over a mountainous road in the middle of the night, and then ride in a vegetable truck with two creepy truck drivers. We were all very regretful that the van was not up to its normal operating capacity. But the next morning, it was repaired and ready to go.


And when we really needed it, it pulled through,and not only for staff beach trips. During the infamous commemoration of 2012, our favoured mode of transportation was more reliable than the government and all its agencies in ensuring that the three hundred snapping turtles andthe Sembrandopaz staff made it to the commemoration on time, or at least during the same day as the commemoration. As we rode, in the dark, up the bumpy hills to Mampuján Viejo, stuffed to capacity with sacks of escaping live turtles serving as seats, we were all grateful at least not be on motorcycles carrying said turtles in our hands.

Instead of a hotel, hammock, or sheet on a concrete floor, why not consider a night or two in the backseat? This is not a romantic proposition, but rather a realistic understanding of the capacities of the van during large events, like the recent non-violent march in the Montes de Maria. Besides serving as the travelling supply closet, full of plastic Tupperware, water bottles, bandaids, dust, expensive camera equipment and emergency almonds, the van was also the mental health centre. It was a place to ride when walking was too hard. It was a gathering space to compare notes, talk through bathing and political strategies, and to catch a few hours of sleep after midnight negotiations ended and before breakfast preparations started.


As the highlight of our good-by celebrations in Sincelejo before leaving the coast, we named the van the “Burro.” And what better name than Donkey to describe the van? Hard-working, unassuming, tenacious, yet stubborn, it helped us prepare the fields for the peace work we wanted to plant. Its unfailing, but at times obstinate labour, was a hallmark of Sembrandopaz for everyone in the region.

A few days after the fateful naming, we received word that the van had been attacked by an actual donkey while parked at the side of the road. No one can fully explain why. Perhaps it was jealousy that caused the actual donkey to smash in the passenger side window with its head. However, because I used to work with Sembrandopaz, I have been forever infected with their particular brand of impossible optimism. I view the events of that tragic day as a show of mis-guided affection. All the feel-good hormones induced by non-violent activities and successful micro-credit projects simply spurred the donkey to express its love in the only way it knew how, with unfortunate consequences.

I do not know if the van will as yet be resurrected. As Sembrandopaz staff, we believe in miracles. We have seen them happen. I do know that, whatever comes next, that blue van will always hold a special place in my heart, as in the hearts of many.

To learn more about the AMAZING work Sembrandopaz is involved in on the coast of Colombia, check them out on facebook!