“What I want to say is
that the past is the past,
and the present is what
your life is,
and you are capable
of choosing what that
will be,
darling citizen.”
-Mary Oliver

I got off a plane in Tel Aviv during the height of the second Intifada in 2001. I was turning 19, attending a conservative evangelical Bible college, and desperate to see the world; I jumped at the opportunity to do so under the guise of a mission trip. What could be better than showing love to Jews returning to their homeland while getting out of small-town Canada?

Before our trip, no one mentioned the conflict and the serious outbreak of violence taking place in the Palestinian Territories, except to say that the danger level in Jerusalem was overrated and that things were, like usual, complicated. If we wanted, the mission agency would send letters to our parents, verifying our security. 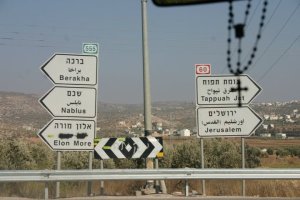 When we arrived, our group was told we were part of God’s plan to reestablish ancient Jewish lands, including Judea and Samaria. Upon completing our work, which mainly consisted of painting a fence for a US based fundamentalist group and packaging food for newly arrived Russian Jews at a food bank, the mission gave us certificates proclaiming our role in fulfilling prophecy. We travelled to holy sites to witness biblical promises coming true, such as Masada, the Lake of Galilee and Tel Megiddo, the location for epic End Times battles during the coming Armageddon.

We were not able to visit Bethlehem, because of “unrest” but we did take our picture with members of the Israeli Defense Forces, awed with the heroes putting their lives on the line to defend their country. While walking down a main street in Jerusalem one evening, we witnessed a bomb detection robot blow an unattended bag of garbage to pieces; we woke up during the night to the sound of an explosion and in the morning learnt of a bomb going off in front of a bar a few blocks away. These hints of danger lent an added air of excitement and urgency to the, in reality, boring tasks we were engaged in, providing a sense that we really were involved in the making of history.

The complexities of conflict and coexistence were seldom discussed and referred to as part of God’s plan. Our only interaction with Palestinians occurred during a brief visit to East Jerusalem through the Jaffa Gate to buy cheap souvenirs, where the cries of venders,the offers of mint tea, and the smell of spices seemed exotic and strange compared to the westernized rest of the areas of Jerusalem we stayed in. The existence of the other was a vague, shadowy threat materialized in middle eastern dress in the souk. 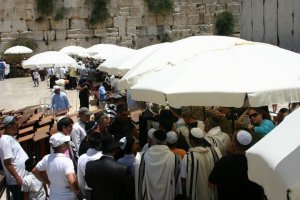 Yet, I fell in love with travel, history, and a world that was forever bigger than the one I had left. Celebrating the Sabbath was a sacred moment. Seeing young boys turning into men on their 13th birthday at the Western Wall, surrounded by men draped in prayer shawls, provided a sense of joy and tradition. I no longer remember my own prayer stuffed into the crevices of the women’s section, but it probably was of thankfulness and a plea to become a woman able to grow into these experiences with grace and love. As I glimpsed the Mediterranean one last time from the air, I vowed to come back.

And in 2010 I was, but under different terms. Instead of fulfilling prophecy, I was directly exploring conflict and politics with a learning tour. Many of the sites were the same, but the focus was different. Instead of applauding ourselves for our biblical faithfulness, we lamented our roles in providing aid and support for policies that erased other histories and existences. We spent an afternoon enjoying the peaceful atmosphere of the Dome of the Rock and protested with Israelis in Jerusalem. Instead of painting fences, we helped to rebuild a Palestinian home demolished by the IDF to build the separation wall. For me, it felt like redemption.

We talked to human rights defenders, visited villages without water because of nearby settlements and passed through multiple checkpoints. My most vivid memory, however, is an engagement party I attended in Beit Sahour, on the outskirts of Bethlehem, with my Palestinian host family. More than the lectures and the realities we saw on the ground, I remember the joy. We ate small plates of hummus and eggplant dips, drank arak, and celebrated two families coming together. For one moment, resistance to occupation was the dance floor.

The next morning over a breakfast of pita and olives, our host told us that the water was briefly turned on as they returned home, and how she had watered her sage plants under the moon. That evening, with sage tea in hand, she told us the story of being tear gassed when playing with her son in park a little too close to a checkpoint a month before our arrival, and of tanks rolling through the streets during the Intifada, the same time I was last in Jerusalem.

Paradoxically, this trip was more hope filled than any focus on prophecy. It was only through acknowledging the tragedy of occupation that it was possible to meet those who dream and work for peaceful coexistence, both Israeli and Palestinian. One of my most treasured items is a simple olive wood rosary. A gift from a devout Muslim community leader, I love it not for its religious significance, but because it means the possibility of overcoming difference.

When the other’s existence as a human being is acknowledged, a space is created for peace. When we in the west hide between walls, whether of theological certainty, fear, ideology or economic pursuits, it is impossible to see the asymmetrical nature of the conflict, nor our involvement, nor possibilities of change. There is no room left to acknowledge the shared joys of common humanity.

I cannot stop thinking about Gaza and the loss of precious human lives. This is a lament for our ability to name some lives as more worthy than others, whatever our justifications or good intentions or ignorance. Gaza is a consequence of our refusal to see the other. Yet we also have the amazing ability to love and to change. If our theology causes us to be blind to or justify the sufferings of others, it is time to change our narrative. I know, because I had to change mine.