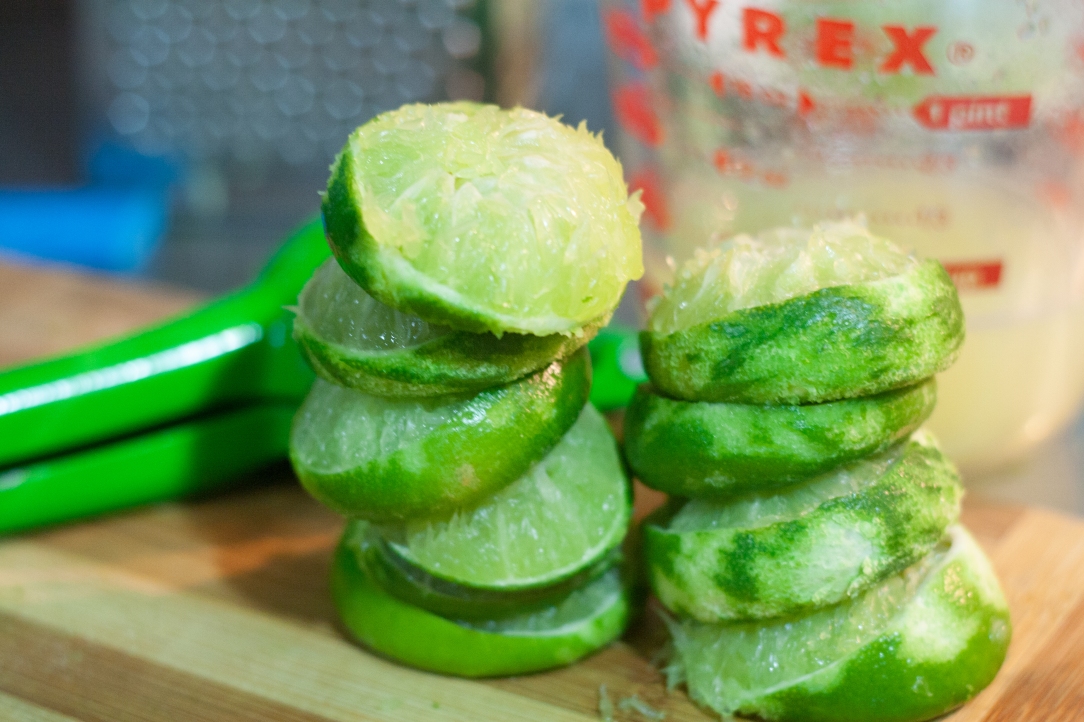 I love Colombia for many reasons. Many are profound: the work of civil society for peace; the cultural vibrancy proudly on display in every region; the determination to enjoy life no the circumstance. Yet sometimes I think I love Colombia almost more for the little things that make up daily life: the hummingbird in the clump of bushes on my way to work; the neighbour who blasts classical music at full volume every Sunday morning; the ability of Bogotanos to be supremely polite yet extremely rude at the same time. And of course, fruit salad for lunch. 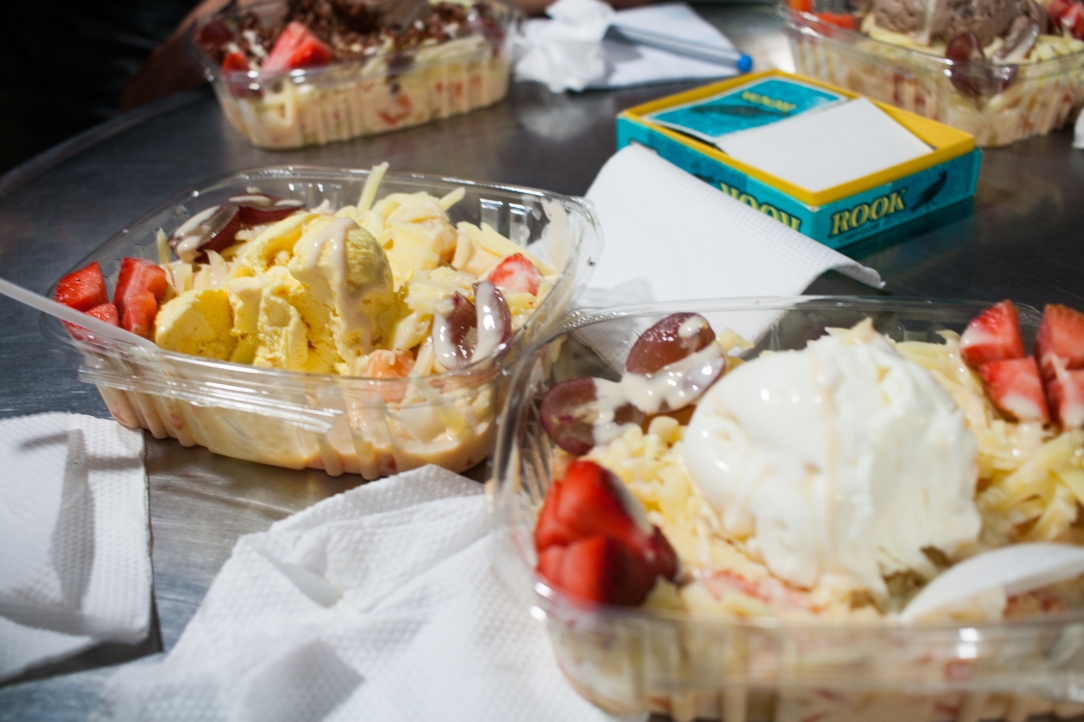 Why would you want to live anywhere else when eating a giant bowl of chopped fruit (think mangos, strawberries, papaya, apples, melon, bananas, dragon fruit, and more), mixed together and topped with not only cream, but also sweetened condensed milk, ice cream and grated cheese is a totally acceptable balanced lunch? Especially when it comes with choco-krispies and cookies on the side?

Colombians are obsessed with the combination of sweet and salty. Fried fish and coconut rice. Cheese dipped into hot chocolate until it get melty.  Plantains and bocadillo. Arequipe (dulce de leche) spread over soft cheese. And of course, fruit salad. 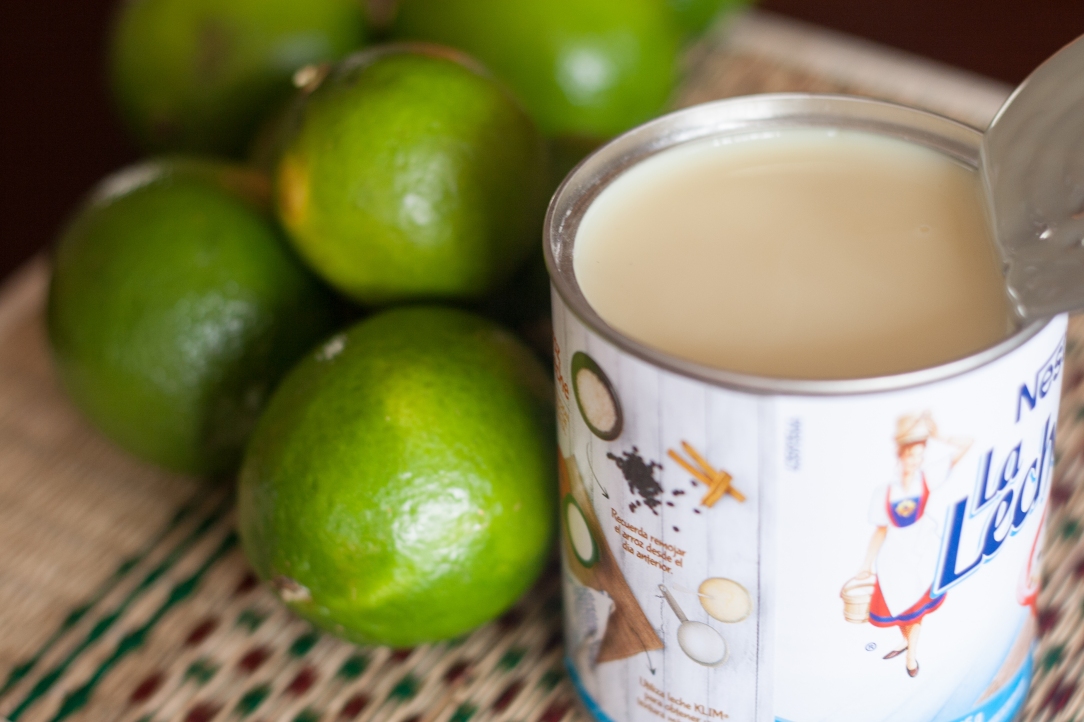 I’m not going to give you a recipe for fruit salad, although I highly recommend it for lunch. Rather, I want to talk about sweetened condensed milk as an essential ingredient, often featured in the snacks prepared at work places across the city, by the thousands of women who scrub floors and serve coffee on tiny metal trays. Sweetened condensed milk, spooned out from the can or created by slow boiling milk with sugar over a low flame for hours, is poured over cubes of jello or  smeared over obleas. Yet without a touch of salt, I find these desserts far too sweet to really enjoy. 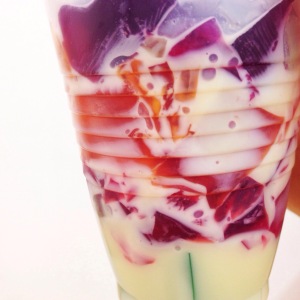 Colombia is the second least equal country in Latin America, after Honduras. Such inequality is reflected in a strong class system, where striving to reach the  middle class often defines social interactions. Class divisions exists all over the world, including Canada, but the fight for upward mobility in Colombia is very notable because of the relative smallness of the middle class. Class markers are everywhere and it is seen as important to be able to locate people within their place in society.

The administrator of my building has two doors to her apartment. Right beside each other, one opens to the kitchen and the other to the living room. When I ring the bell to pay the administration fee, she will often open the kitchen door, then close it and go around to the living room entrance, because “good people don’t come in where the servants enter.” I often see women on the parkway, picking up the poop of their employer’s dogs, noticeable because of their brightly coloured scrubs that mark them as members of the cleaning class. So called important people are always addressed as doctor or doctora, whether they have studied or not. Even the form of address used in Bogota: su merced, is a throwback to Spanish monarchy.

The enter system is complicated to navigate and fundamentally unfair; those in the lower classes are viewed as negative, dirty or objects of pity without a lot of discussion about structural justice. Yet there are still enormous amounts of resilience within those who make up the base of Colombian society. Without justifying oppression because of said strengths, I do want to highlight forms of agency that question the simple categorizations defined by class hierarchy.

One example is the woman who runs the kitchen at an organization I know in the city. In many ways, she has a typical story: from a rural area seeking employment in the city, a single mother at a very young age, a strict evangelical who views barriers as spiritual warfare, not classism. She wears a bright pink uniform that goes with her running shoes perfectly. Yet, just like women from around the country, she exerts an amazing amount of control over her sphere of influence, using traditional women’s work. She has turned the kitchen into the control centre of the organization, a space where informal conversations and discussion inform organizational decisions. The workplace snacks she serves remind the so-called professionals in her office of her cultural heritage and identity. Her use of vocabulary from her region and even her fervent prayers during team meetings assert her in the midst of a “professional” space as a subject in her own right, not simply a voiceless cleaning lady, around to only serve or to be pitied.

The difference between pity and solidarity is the contrast between charity and advocacy. It is one thing to be moved by someone’s plight; it is another thing altogether to ask to understand a situation and question the implications for the structures in which we have constructed our lives. It is the touch of salt on something that would otherwise be too cloyingly sweet that provides the strength. 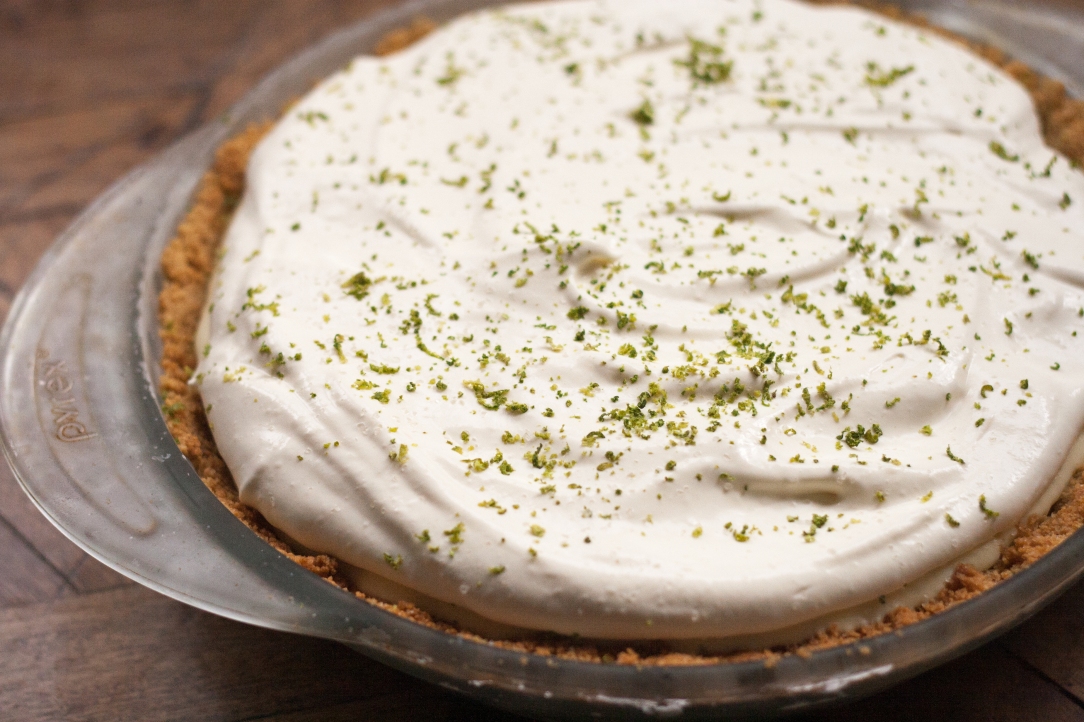 In the spirit of sweetened condensed milk, cheese and Pie Day on Monday, here is a recipe for Salted Key Lime Cheesecake Pie, the perfect combination of sweet and salty.

Mix graham crumbs, sugar and salt in a medium bowl. Add butter and stir until crumbs are evenly coated. Press crumbs into the bottom and up the sides of a standard 9-inch pie dish.Bake crust until lightly browned, about 10 minutes.Allow to cool while you prepare your filling.

Beat zest, cream cheese, condensed milk and lime juice together until the mixture is fluffy and spoon into cooled crust. Sprinkle with sea salt and chill.

To serve, beat together cream and sugar until thick. Slice pie and top each serving with a generous spoonful of cream mixture. Sprinkle on some zest to make it pretty.

3 comments on “Sweetened Condensed Milk, Pie and the Middle Class”