My walk to work this morning was normal. I passed the same dog walkers and shoeshine man as any other day. When I arrived, however, the office was giddy with excitement. Today was the day, long advocated and worked towards: a bilateral ceasefire, ending the active armed conflict between the government and the FARC, after over fifty years of war.

With hundreds of other Colombians, balloons, flags and music, we danced as we watched Santos and Timochenko sign the agreement together on a big screen on the street. I almost cried several times, not because of the importance of the moment, but because of who I was with. For the last three years I have been at Justapaz, my colleagues have eaten, slept and breathed peace. Every meeting, statement and event has been aimed towards a silencing of arms. When I moved to Bogota, I had no idea that almost exactly three years later, we would be hugging people on the street, in part because of work that takes place from my office. I am honoured and proud to be included in this celebration of crazy hope. 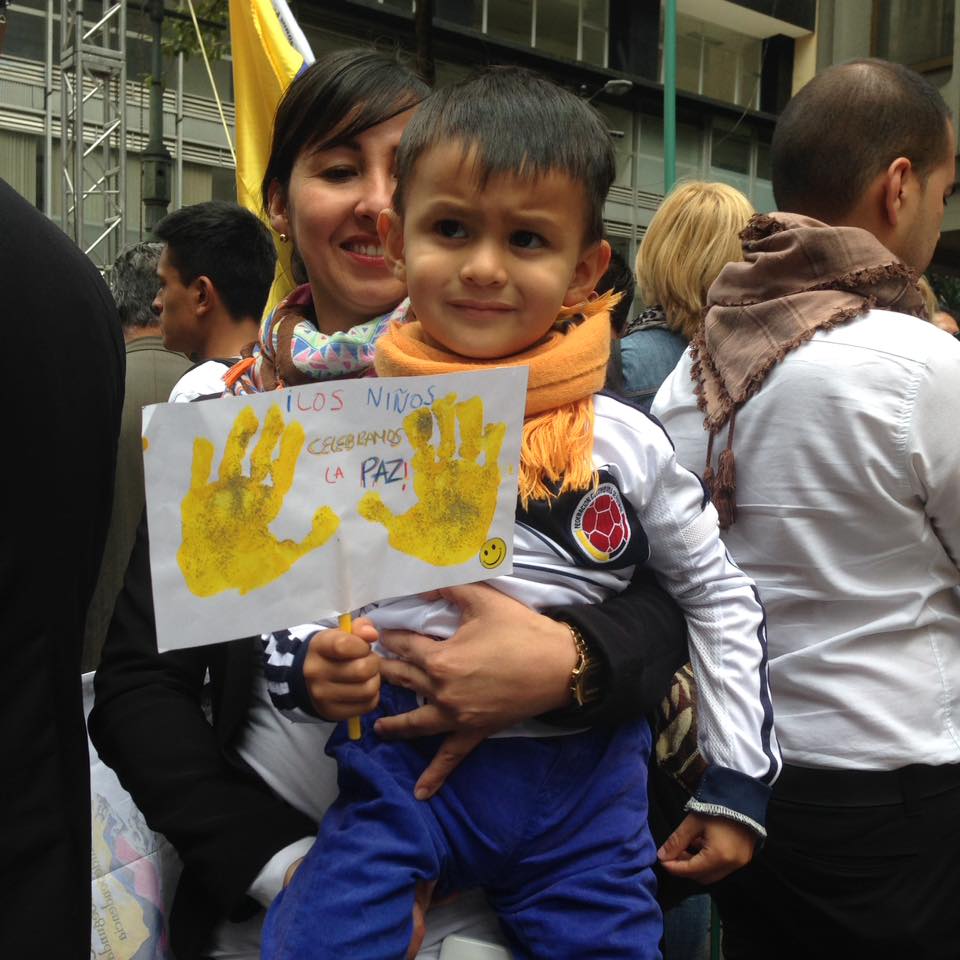 Later on in the office, we shared our feelings about the day in a small continuation of celebration. Jenny talked about meetings for Pan y Paz fifteen years ago, where they decided that every September 21, the International Day of Non-Violence and Ceasefires, small groups of people from churches around the country would gather to pass out bread and demand peace with justice. At the time, the idea that two warring parties would sit down and dialogue with each other seemed impossible. Jenny cried as she shared about the hope of today: it is possible to believe in non-violence even when no one else does.

My walk home this evening was normal. I passed the same dogs that I see every evening and the same hippies slack-lining between trees. I hugged my purse close to myself, just in case. Despite the cease-fire, everything feels the same as it did this morning. Yet I know that this is a chance for real change that will hopefully be lived out in ordinary lives.

As Angelica expressed in the office, she is looking forward to never documenting another human rights violation committed by the FARC. Juan, our lawyer, talked about growing up in the 1990s and being able to recite from memory the noon news: first some dead people because of the armed conflict, then some dead people because of common crime, then sports, then nonsense. He is hopeful to see different news and work within a legal system that promotes peace, not war.

There is much work left to be done, including the signing of the final peace accords and the creation of structures of social justice and trust. As we may our way back to the office, wearing DiPaz t-shirts proclaiming the need for truth, reparations and justice, a woman selling chips on the street scoffed at us. What hope of peace is there if Santos is freely giving the country away to the FARC?  This sentiment is shared by many and freely propelled by the extreme right. There are other active armed groups in Colombia and insecurity will continue.

Today, however, is a day for celebration and remembrance. Tomorrow will bring new challenges, meetings and emails as my Colombian colleagues figure out how they work and advocate within this new phase. Today, we remember that change is possible and say yes to peace, for today and for tomorrow. I think of the people and communities I have come to love across the country and hope and pray that peace will create both great and small changes as they continue to live their lives in a different Colombia.