On Thursday night, we arrived to the plaza, arms sore from standing on the corner holding five giant banana breads and trying to wave down taxis. Once we finally got to the  peace camp with our offerings, nobody would let us inside, even as they took the cakes. As we started to step away, the man at the entrance suddenly pulled me into a giant hug and whispered with delight into my ear. “It´s because the president is coming!”

All apparent signs (passport, family, language, job contract, strong dislike of hot dog pieces in rice) point to the fact that I am an outsider. My head, however, somehow crossed a line this month, as I opened the door to my building after a long flight back from Canada.  Emotionally, I feel like I am an insider, even as my downstairs neighbours ask for English classes. 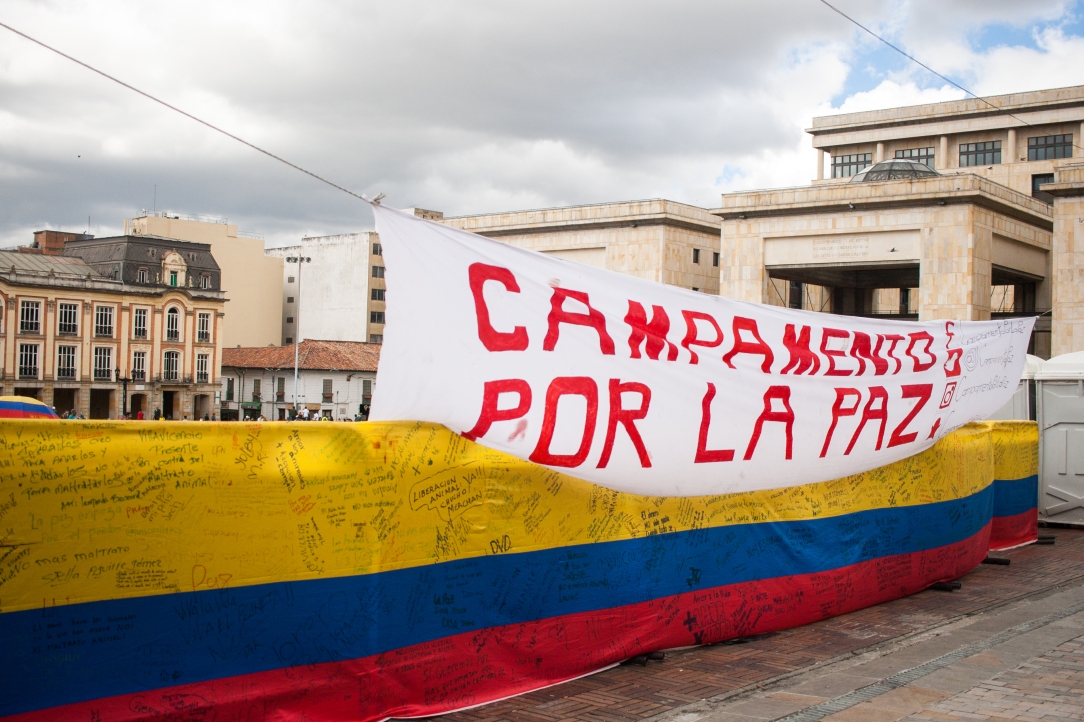 Ever since coming back, I have been filled with a barrage of nervous energy and the need do something. At least twice, so far, I have emailed my supervisor in a frenzy, afraid of being deported, yet unable to stay away from public spaces and new political expressions. I spent the afternoon at the peace camp; I marched in the street; I lingered at the edge of planning assemblies. Every event and meeting during my time here has conditioned me to be deeply committed to peace in Colombia, yet the foreignness of my body itself is a reminder that current spaces and movements are fundamentally not mine.

Hence the banana bread. I showed up at the office, ready to lead a baking group and do something productive instead frantically reading news and feeling left out. We made cake, Elizabeth folded origami butterflies,  and Amy took the photos.  I found myself, however, smashing bananas and giving a cooking lesson as ladies from the office perched on the couches around the table, jotting down the recipe for banana bread. In place of group excitement for feeding the Peace Camp together, I became a one woman Canadian cooking show.

And, of course, the very moment of cake delivery coincided with the most media attention ever received at the camp.

So we stood there, mouths agape, watching cameras and press people arrive and then Santos himself striding in a fast blur into the camp. As the press pushed against the camp barrier, it became impossible to see what was taking place inside. All I could think about was the president possibly eating my cake while seated on the same flimsy, plastic stools that participants had accidentally kept falling off of the week before during a small Sunday afternoon gathering. That, and trying to avoid three hundred cameras.

Then I went home, and Ely had not yet arrived from her course at the Centro de Memoria at 10:30 pm. I was instantly worried. If it seems as if Ely has become a regular feature of this blog, it is because every time I see her, I am reminded that Colombia is much more than my daily routine of office and Parkway and that questions of belonging are much more complicated than simply nationality.  In the span of one hour, it is possible to go from presidential sightings and peace camps to a reflection on the vulnerability of women’s bodies walking alone.

The streets after dark are places Ely and I are both not allowed to belong and consequences can be much more terrifying than worry over deportation. These are different streets than the safety provided by a march. My ability, however, to constantly pay for taxis and to recognize the hidden lines crossing the city, dividing safe from unsafe, provides me with a way of belonging, even when I can’t always be in seen in public spaces.

Yet when Ely talks, her point of reference is always her community, her family and her culture, ways of security and understanding that have provided her with a sense of self-confidence and belonging that is astounding. Her community, Libertad, is labelled a resistant community, in Colombia’s complicated hierarchy of victims, meaning that the paramilitaries did not manage to displace the town during the height of violence. Rather, they used the community as a base camp, terrorizing the local population and raping women.

“There are seven flowers on the statue of Liberty in the central plaza, meaning the seven women who denounced their rape.” Ely tells me over breakfast the next morning, having safely arrived home after all the night before. “The smaller flowers represent the women who suffered in silence.”

The conflict itself has belonging at its very roots and decades later, these questions still branch across all sectors. Who belongs in Congress? Who belongs on the land? Who is included in the Victim’s Registry? Almost 7 million displaced people live in a state of impermanence. In light of sexual violence, where impunity rates are at 97%, bodies themselves continue to be contested territory.

Ely and the group of young people she belongs to in Libertad use music and theatre to carve out spaces of identity in ways that allow them to claim a place in Colombia, a place that is very different from the streets of Bogota. I see the same thing happening at the Peace Camp, as occupiers claim a literal space in the Plaza, chanting “Que viva la Paz,” as Santos walked into the encampment. 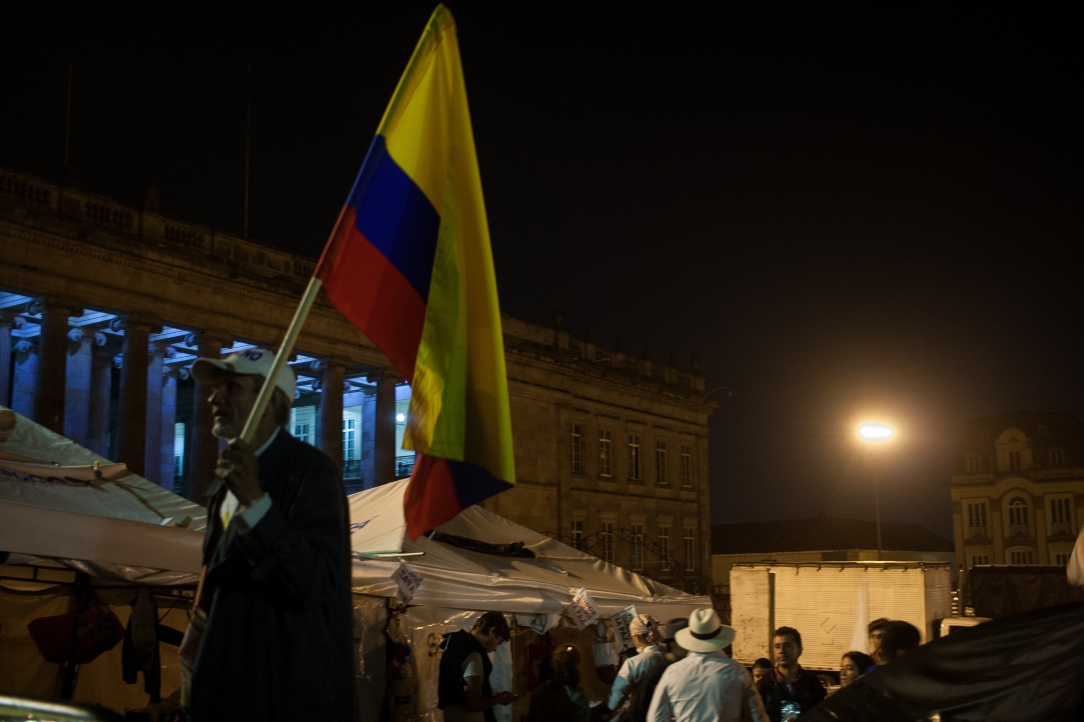 For my thirtieth birthday, Larisa and I went out shopping at the Palacio de la Pantaleta in Sincelejo. We walked right past the lacy underwear in the Panty Palace to the jumpers and dresses. When I showed up at my party in an excruciatingly tight and short number, nails done and hair straightened, to proclaim myself reborn as a Colombian, one of my fellow Seeders, and an actual Colombia, tore into me for my offensive behaviour.

“Who do you think I am, as a Colombian woman?” she asked. “Do you see me dressed liked that? What are you saying about me?”

I am slowly learning to see the multiplicity of perspectives and layers that encompass belonging and being Colombian, and to also see and understand the impacts of my actions and interpretations. Stereotypes and easy solutions are never the answer, even as I long to be part of the place that I live.  This is the richness and the challenge of this current moment and any post-accord scenario: recognizing expressions of commonalities, differences, and providing a space for coexistence and participation in a way that is much more than just a feeling of being an insider or an outsider. The streets belong to all of us, not only during marches but also alone in the middle of the night.

My presence continues to be a complicated, tricky question, in overlapping circles: my apartment, the office, this blog, my neighbourhood, my activism. I stand at the outside of the peace camp, never quite sure when I am allowed inside, yet still able to paint a picture in my mind of people, conversations, and activities, because those are also the circles in which I move.

Here is Ely, beautiful and full of pride in her community and what she is capable of providing, to Colombia and to her own future. And here I am also, unsure and sometimes frantic, trying to straddle the middle of insider/outsider without falling apart. Yes, definitions of belonging matter. But Friday morning, as I woke up to strains of vallenato coming from the living room, I realized that I still smelt like banana bread.

I´m not really sure what that means, besides the fact that I am trying. Maybe the president eats your cake. Maybe you end up on fake a cooking show at work. Maybe you fall of a chair trying to be inconspicuous at the peace camp. Maybe, you simply stop, take a deep breath, and then laugh until you cry. I am so glad that I am here.