Variations on a Vocabulary

There are still moments, as I pass families and small groups of friends in the park, that I catch my breath over snatches of conversation. It is all normal chatter: dinner plans, boy problems, family news. The miracle is in my effortless understanding of everyday Spanish: la cena, el tipo, la tía. A new language is a glimpse into another world of relationships and understanding. Every word that I would not have understood before Latin America continues to amaze, not because everything is extraordinary, but rather, I am slowly coming to understand the ordinary through a new framework. 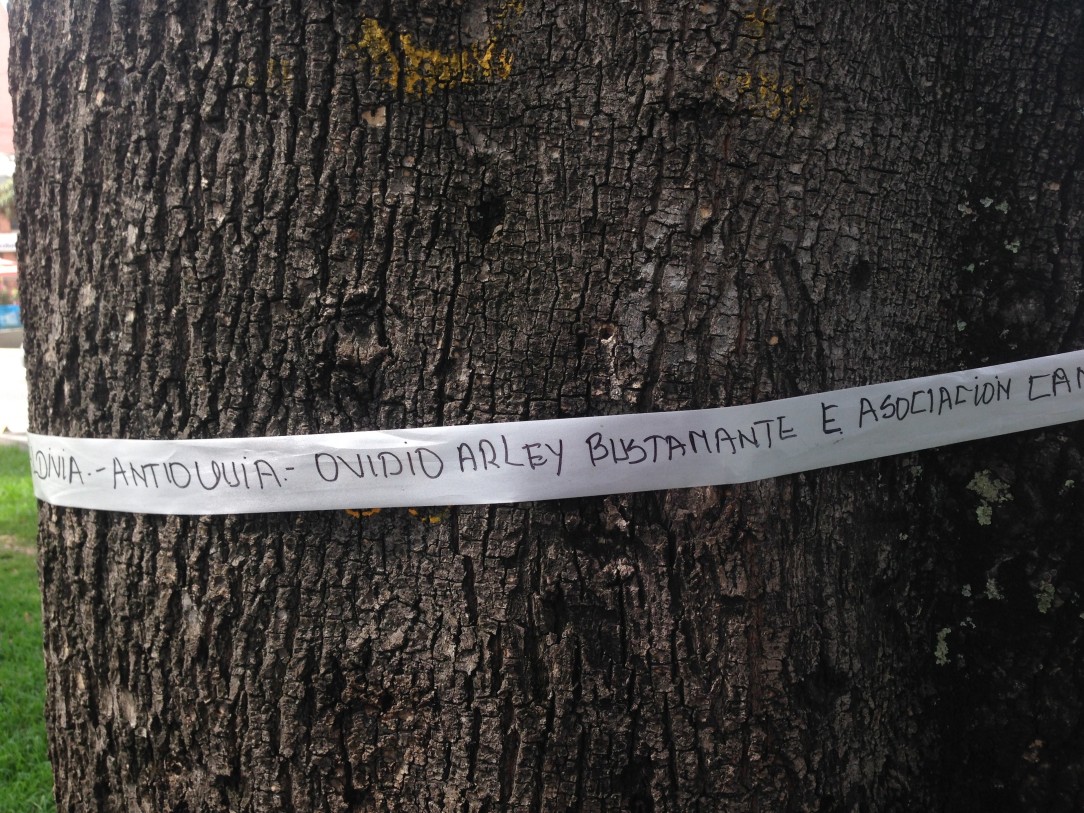 Alongside the ordinary, however, are white ribbons wrapped around the park’s trees. Over the last few months, since the signing of the peace accords between the government and the FARC, armed groups have been busy killing activists and community leaders across the country. At last count, on Jan 21,15 people have died since implementation began and at least 57 social leaders were assassinated during 2016, although estimates are higher.  My neighbours wrote their names on the white ribbons, a visual reminder on my way to work that Colombia is the most dangerous country in the world in which to be a human rights defender, and Latin America the most dangerous to be an environmental defender. Work chats and news reports contain a whole other vocabulary list.

Behind all of these words is yet another web of relationships and complicated context: neo-paramilitaries and state forces are responsible for the majority of deaths, which are often connected to land rights, Indigenous leaders or members of Colombia’s left.  Often normalized, this violence is anything but ordinary, yet I am becoming more and more fluent in the art of its description.

On Tuesday, a colleague sent a quick tweet to our group chat. Emilsen Manyoma Mosquera, of CONPAZ, a human rights and land defence network, was dead, along with her partner, Joe Javier Rodallega. Armed men brutally tortured and killed the couple, close to their home in Buenaventura.  I had never met either of them, but we walked with the CONPAZ folks during the Marcha de los Flores; many of my photos feature their smiling exuberance. While I did not capture Emilsen’s face during the march,  I caught a glimpse of the sheer collective joy of the moment. Members of CONPAZ danced, sang, painted faces, and very publicly expressed their hope for a better Colombia, one that they work to create everyday on the Pacific Coast.

Peacework and activism is not a walk in the park, nor usually collective action on the Septima. Generally, it is phone calls, meetings, reports, emails, and all the mundane activities that add up to possible change, and sometimes death. Emilsen and Joe are the latest victims.

Yet alongside a vocabulary of horror is one of power:

All of these words represent an entirely different web of relationships and solidarity. Despite trauma, conflict, and death, everyday I hear and see those around me continuing to build the future, together. In the face of threats, resistance grows stronger. Words of strength pepper conversations and actions. 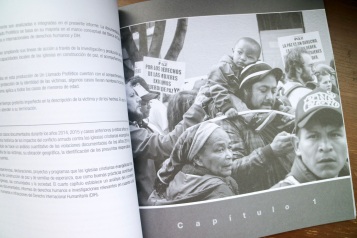 Justapaz released their 10/11 annual human rights reports this month. The document is one of the organization’s biggest advocacy strategies. By documenting human rights violations in the framework of the conflict among  non-Catholics, Justapaz can use the lens of faith to pressure the Colombian and US government to end military spending, support peace processes, and work to protect at risk civilians. My contribution this year are the photos featured throughout. As with language, I use a camera to capture the ordinary profound that I love about Latin America: a plate of food, boats on a beach, and people in the midst of life.

In this edition of the Llamado Profético, our graphic designer choose my photos from the Marcha de las Flores to place throughout the book. We not only document human rights violations, we also document Seeds of Hope: the everyday, grassroots initiatives and spaces that refuse to give up in the face of violence. There are still white ribbons on the trees, to remind us of what is lost and what we continue to work towards.

I am a Canadian with a Spanish bad accent, an awkward personality, and a colonial history, yet time and time again, organizations and communities have invited me to join them in their work. During the Marcha de las Flores, we stood on the sidelines until the folks from Justicia and Paz and CONPAZ, walked by, SIN OLVIDO held high. All at once, instead of standing on the sidewalk, we were walking alongside. That invitation to walk alongside, through all the variations of peacework, from the mundane, to the ecstatic, to the terrible, are what have defined accompaniment for me over the last few years. It is a privilege to sit in an office, stand on a street and learn another vocabulary, together.

With that privilege comes responsibility. As CONPAZ states,

Today, the bodies of Emilsen and Joe were snatched from us, but their glances and smiles full of river, mountain, neighbourhood, dignity and love of life will feed the future.
Today, in the midst of pain and tears, we demand from the Colombian Government full guarantees that will lead to the protection of our life and integrity. We do not want more companions killed. We are building peace.

Accompaniment means action and reflection. We must encourage our governments to uphold humans rights standards when engaging in trade with Latin American countries with a poor track record and pressure Colombia for a full implementation of the peace accords, that includes protection for human rights defenders. Read documents like the Llamado Profético and be aware of places in other parts of the world. How do our own actions contribute to the instability of countries far beyond our borders? Consider donating to grassroots peace movements around the world.

Rest in power, Emilsen and Joe.

1 comments on “Variations on a Vocabulary”