Determination and the Inca Trail

“Don’t talk about aliens. Talk about people.” Raul turns around to fully face our group, giant stone blocks in the background.

While we are gazing in wonder around Machu Picchu, pinching ourselves to try to believe that we actually made it over the Inca Trail, our guide Raul is done with our nonsense. We are sunburnt and sore, happy, yet exhausted. When Raul asks us how we thought the Inca was able to move the giant rocks they used to construct the city, the only answer we can come up with is a giddy outer space.

“This is the power of the human spirit.” Raul lectures. “People, being determined to do what they can. We may only have ideas, not confirmed facts of how they did it, but this  city is what people can achieve.”

I am on the Inca Trail with my 67 year old aunt Evelyn, her two artificial hips, and a bunch of strangers, some of them soldiers and police officers on vacation. We walking, over mountain passes and down hundreds of thousands of stairs. In our group of mainly young, athletic men, my aunt and I are often last, followed by Raul as he ensures we arrive safely to camp each night.

Raul and I chat for hours as we walk. He tells me about carrying people who have given up on the trail, literally hauling them over the mountains passes on his back. To avoid destroying his knees, he has become very good at predicting, after the first day of hiking, which people have the willpower to push through the next three days and which hikers need to be turned back. It’s about determination, he says, about a certain look in someone’s eyes that means they are imagining themselves arriving to Machu Picchu. Despite the slowness of our pace, that look gleams out of our eyes. As we climb the ancient route, once traversed by Chasquis and members of empire, we pass Inca ruin after Inca ruin. At each once bustling city, the only signs of life are the llamas grazing, unperturbed by our selfie attempts, and us, groups of tourists eager to cross this one off of the bucket list. Raul talks about culture and ways of life before the destruction of colonization. He tells us that the ancient Incas believed in the apus, natural formations that were seen as living sacred protectors. People would give them offerings of gratitude, a way of taking care of the Pachamama, the earth.

I ask Raul if today’s Quechua communities, present in the region since before the Inca Empire even existed, continue to engage in any traditional practices. I use the example of the Bolivian highlands. On special days and before Carnival, everyone fills the corners of their home with sugar and coca leaves, offerings for the Pachamama.  Yes, Raul tells me. The idea of giving back gifts for all that has been received, of giving back to the earth, continues. After that conversation, I pay attention. Everytime Raul opens his water bottle and before taking a sip, he spills a few drops on the ground. This seems to also be an offering, a thank-you to the Pachamama and a continuity of the bonds of human to earth.

Alongside ruins, we pass through Quechua villages. Inhabitants supplement their farming income by selling us snacks, bottled water, and the chance to use a sit-down toilet. The people along the trail are a reminder that ruins do not tell the whole story. The ancient cities may be markers pointing to the past, but the women selling water right before the first mountain pass are the present. The porters carrying our bags are descendants of the empire. Not everything is lost in the crushing devastation of colonization and conquista. Ancient customs mix with new. People still speak Quechua and leave offerings for the Apus. The glaciers covered mountains and the river that flows through the Sacred Valley are not  inanimate objects, but are still the living protectors, not simply of the Inca, but of the majority of the people who continue to live along the trail. There is grief, but there is also resistance, adaptation and evolution in a way that allows for survival. Greater than the giant rocks at Machu Picchu, this too is a form of determination, all the more powerful for its subtly.

At our last stop, we pause in front of a giant rock. It’s shape mirrors the Huayna Picchu mountain and was therefore sacred. Archaeologists discovered the body of a shaman buried under the rock, highlighting its importance as a spiritual site. As Raul talks, a group of women standing nearby begin to chant. They are obviously foreigners and their druidic ritual feels oddly out of place with the moment. As we keep walking, I ask Raul if any rituals continue to be practiced in Machu Picchu itself. Only that, Raul says, referring to the group of women. Mystical tourism. People gather from around the world to draw on the sacred energy they believe still remains in these sites. As part of the tourist crowd, it can be easy to focus on ruins and rituals and miss the real life that is taking place all around. Our vacation fun, the tourist experience of the mystical, is only possible because our belongings and sometimes our actual beings, are carried on the backs of the men who can trace their lineage back to the beginning of ritual and practice in this specific geographical location. These are not special places because they are full of sacred energy, but because they point out the richness of culture and belief, the devastation and continuity of colonisation, our participation, and the power of resistance. In our search for the historial, for the magical, for the experience, we can miss the living. 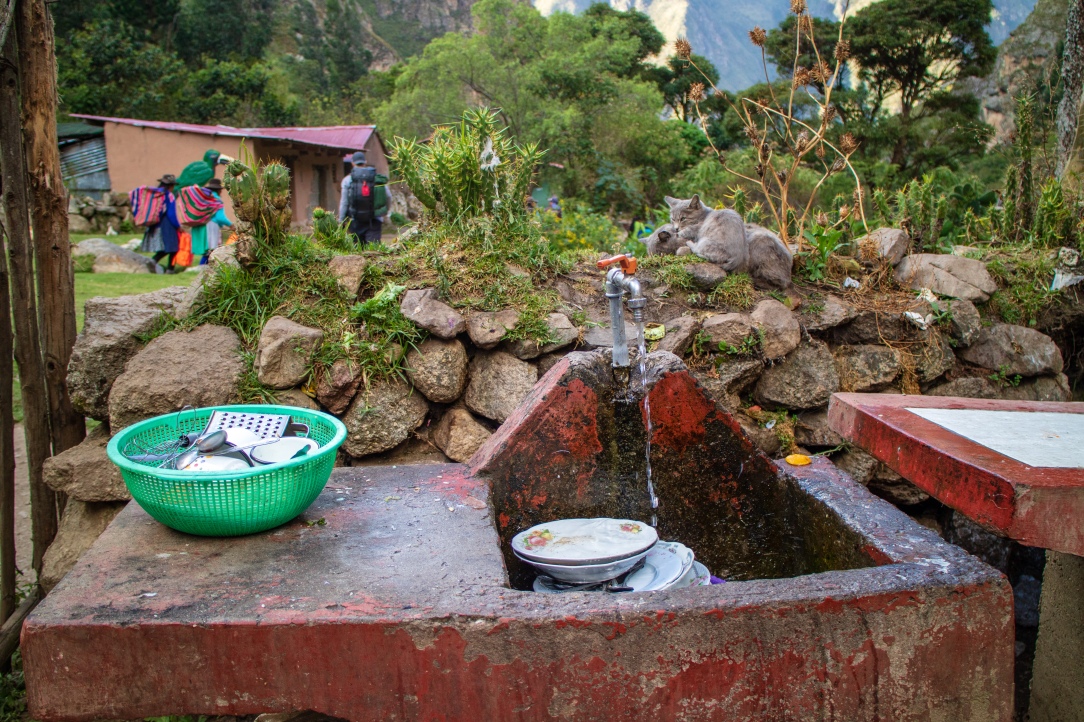 Before leaving the quarry, Raul shows us some other rocks, full of giant holes and tunnels. One theory, he explains, is that the Inca would insert pieces of wet wood in small holes in the rocks. When the temperature dropped, the water, and therefore the wood, would expand, forcing the hole to grow. Tunnels and irrigation systems weren’t created through brute force, but through the power of water, expanding and contracting. Determination isn’t always obvious. What about on the micro level? I walk each day alongside my aunt. To the other people on the trip, she is the slowest one, the mama in the group. Each step, however, is an act of power, the same power that has guided the women in my family for generations. In the evenings, we talk about my grandmother, a Russian Mennonites homemaker and mother of six children, giving speeches near the end of her life, finally about herself. The courage to be water shaping rock takes place in all sorts of forms: airplane pilots, mechanics, academics, farmers, business owners. The list goes on, but there at the top is that gleam of possibility, the bending, not the breaking. I don’t often think of myself as brave, but when I think about the women in my family, I can see myself following in their footsteps, one step up a mountain at a time. This is part of what it means to be alive and to be human.