Over the last few years, I have grown cynical. I hear promises and assume they will be broken. I go to meetings and marches and remain unmoved. I have little faith that big change will take place.

It is easy, in the day to day slog of imprisonments, impunity, broken promises and violence, to forget about hope. Jorge is still in jail while paramilitaries are being released. Aboriginal women continue to be missing and murdered. Reparations promises are broken. Armed conflict continues.

Yet, the last three years have been filled with possibility. I was there when the first group of Mampujaneros received their reparations. I was there when diverse communities in the Alta Montaña came together in a reconciliation movement to demand their rights. Even from prison, Jorge is able to inspire hope and solidarity through his letters.  The first group of victims who participated in the negotiations process shared how the experience had created a sense of possibility that the conflict could end and Colombia could be different. The World Cup created a new sense of unity around the country.

The mothers and grandmothers of the Plaza de Mayo have been demanding the return of their disappeared children since the beginning of the Argentine Dirty War in 1973. Ever since I wrote in a research paper about them, I have admired their courage. It was a delight and an honour to meet one of these women last April during a Days of Prayer and Action activity. It was an even greater joy to read that one of her companions in the lucha was reunited with her grandson after 36 years of searching. 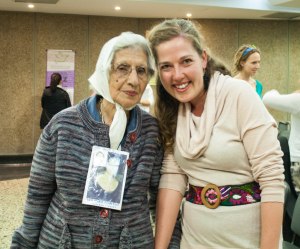 What I am learning is that hope is unexpected but always awaited.

The moment  I found out that  conscientious objector Jhonatan had been arrested, my heart sank. Based on Jorge’s case, I had little hope that he would ever get out. In between the frantic elaboration of action alerts and hagtags (#liberenaJhonatan), I did not actually believe anything would work.

And you responded and I watched in awe as solidarity grew. Over 300 people, the majority who had never heard of Jhonatan before last week, sent in letters. Strangers tweeted messages of encouragement. Thousands of people saw and shared his story on social media.

Then, in a precedent setting order, the Constitutional Court ruled on his behalf, demanding the army free him from obligatory military service and respect his rights of belief and of conscience. New legal strategies were put into motion.  A day later, as the Justapaz team sat in a emergency planning meeting, Jhonatan’s mother called to tell us that he was being let go. A few moments later, he was outside, hugging her.

Although the military court proceedings against him remain open, I choose hope. I have seen the impossible become possible because ordinary people have had enough hope to make change happen. From Jhonatan choosing to say no to violence, to communities coming together, to women marching every Thursday for 41 years, to one of you sending a letter: all of these are acts based on a belief that change is possible, in hope against hope.

This Sunday is the International Day of Peace, a day many Colombians mark with the celebration of Pan y Paz (Bread and Peace), as a reminder that without economic justice there can be no peace. Jenny Neme, the director of Justapaz, has seen many moments when hope seems impossible.Yet, in words taken from her editorial in our radio program on Wed, she shares “Pan y Paz does not take place this year simply because there is a negation process moving forward between the government and the Farc. Rather, it is because for years, many people in this country have had a clear desire for peace, for justice, for equality. When we understand peace through a lens of nonviolence, neither armed struggles nor military action are valid.  For a long time, churches have been offering the message that it is conceivable to have a different Colombia, where peace is embodied and living in dignity is possible…The persistence of Jhonatan and his family are a great testimony for the many people who also, in line with their convictions, refuse to contribute to war. It is a strong testimony for peace in this country. We do not need more youth formed for war, but for peace.”

Let us join with Colombians to celebrate, work, and yes, hope for peace this Sunday and all year long.